You are here: Home / Random Blog Posts / 7 And A Half Random Facts About Portugal:

1) In a Portuguese bullfight the bulls don’t die. 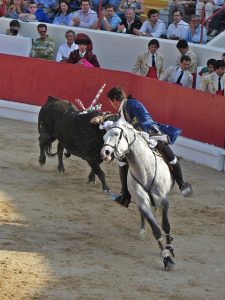 Can you just leave me the f**k alone?

They don’t die, but they really don’t have a fun day out either, being injured so much that they usually have to be slaughtered afterwards. Portuguese bullfights are also distinguished from the classic Spanish style in that the bull is fought first on horseback, where a rider runs around sticking various spears into the bull (whose horns have been filed down previously, to, ironically enough, ‘protect the horse’), until it gets so weak that it can then be subdued by a group of 8 men on foot called forcados who grab the horns and wrestle the bull to the ground.

It is in fact illegal in Portugal to kill the bull Spanish style, except for in one town in Alentejo called Barrancos which is by the border with Spain and which has managed to organize a special exemption for itself for by playing the ‘our tradition’ card.  These days though, apart from in a few strongholds like Barrancos, bullfighting generally has lost most of its popularity, with surveys showing most people, especially young people, to be against it.

2) One area of Portugal produces almost half the world’s cork. 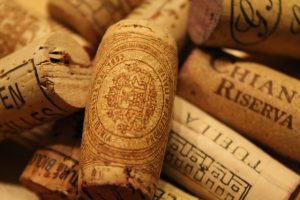 Way better than a cloth soaked in oil..

When they reach the age of around 27 years old, the cork trees of Alentejo, whether they like it or not, get stripped of their bark, and again every nine years or so from then on.

The first batch of cork is seen as lesser quality and used mainly for industrial products while later harvests go into its far more famous usage; as wine bottle stoppers, or well, wine bottle ‘corks’, with these days over 60% of all that is harvested going to the wine industry.

It wasn’t always that way though, up until the mid 17th-century wine makers in France thought it an unbeatable idea just to stuff the necks of bottles with cloth soaked in oil, before someone handed them a bunch of corks and they immediately began to feel a bit silly.

3) In Portugal they eat more seafood per person than any other country in the world. 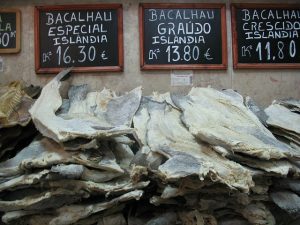 Portuguese bacalhau, all the way from Iceland.

They get through over 80kg of the stuff per person per year, so until maybe Greenland gets its independence, they’re the champions.  You might well be forgiven for thinking it’s all sardines and bacalhau, their famous dried, salted cod dish, and though that’s a lot of it, you’ll find a good range of other seafood in Portugal too; linguado (sole), piexe-espada (swordfish), mexilhões (mussels) and salmonete (red mullet) are just some examples.

4) They also brought home some of our favourite foods. 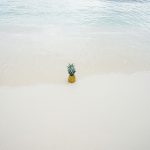 Its long sea faring and imperial history led to it being responsible for the introduction of many different foods to Europe: Peanuts and coffee from Africa for example, peppers, tomatoes, potatoes and pineapples from the Americas, and a whole heap of spices from around the world too; paprika, pepper, ginger and saffron amongst others.

And they didn’t only influence European food, Portuguese sailors also introduced chilli to India and Africa for example, and tempura to Japan.

5) And showed the English how to drink tea… 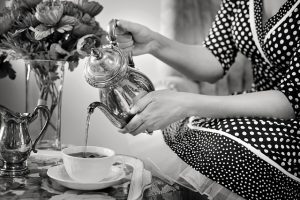 The culture of tea drinking was already making inroads throughout the mainland European aristocracy before, in 1661, a notorious tea addict Portuguese princess named Catarina Henriqueta de Bragança (Catherine of Braganza to the Brits) married King Charles II of Britain and hooked up him up as well to the leafy danger.

Charles himself, like many of his compatriots, would have come across tea before but just wasn’t that in to it; it just wasn’t a thing they did. After Catarina came along though the poor King found he just clammed up in social situations without a cup of cha in the hand and very quickly it was to become a daily habit, both for him and the rest of the English aristocracy. Within a few generations, the tradition had become solidly ingrained within the upper classes and eventually all of society, even as the Portuguese had long moved on to coffee. 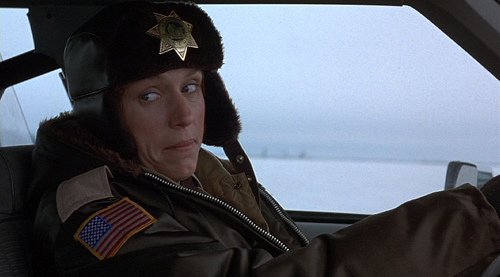 Fado music, or Fargo music, as a friend once called it numerous times over the course of a night out in Lisbon and wasn’t once corrected by me, is Portugal’s most symbolic music. It is urban music, born and raised in Lisbon, with a slightly alternative style also nurtured in Coimbra, and it is gorgeously bittersweet, melancholic, and full of pain.

Its most iconic performer was someone who lived and died before her voice could ever be recorded. Maria Severa only became famous long after her death in 1846 at the age of just 26 and her often mythologized life story, as both a singer and a prostitute among the taverns and brothels of Alfama in Lisbon, was to become an enticing representation of the early days of Fado, as she, just like the music, floated somewhere in the space between the bohemian nobility of the time and the poor and marginalized from where both her and her music had their origins.

Take it easy with the Fargo though; after a night of listening you might not see the point of climbing out of bed the next morning, such is the fatalistic darkness that it injects into the soul. (If you don’t have a soul though you’ll be just fine.)

7) War, what is it good for? Portuguese wine, apparently. 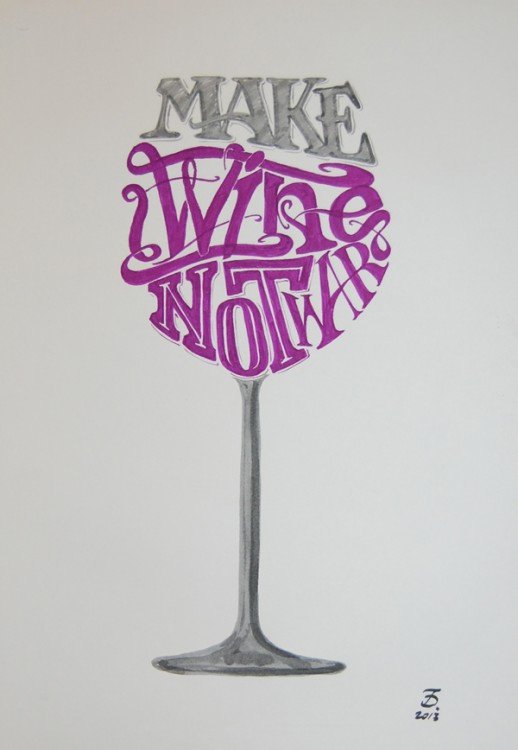 I’m certain you don’t like war in the slightest, I’d never dare accuse you of that, but, if you happen to be enjoying a nice glass of Port wine while reading this you might as well look on the bright side of humankind’s most embarrassing stupidity.

Northern Portugal’s Douro Valley wine region is the source of that sweet red fortified wine which might have remained an obscure local farmers tipple had the Nine Years War between Britain and France not broken out in 1688. The boozy British upper classes had by that stage developed a major taste for Bordeaux claret and to their horror suddenly couldn’t get it anymore.

Though I guess the Nine Years War probably wasn’t advertised as such at the start they probably assumed it might take some time to wrap up so they began to look for a replacement. They found port and were it seems, impressed. By the time claret became available again port had already made its mark and to this day is pretty much world famous.

Except for Germany, Greece, Poland, Spain, Italy, Iceland, Britain….and a whole bunch of other countries. 🙂

Interested in a trip around rural Portugal?? Check out our choice of farmstays here: https://www.farmstayplanet.com/farmstays/portugal-1