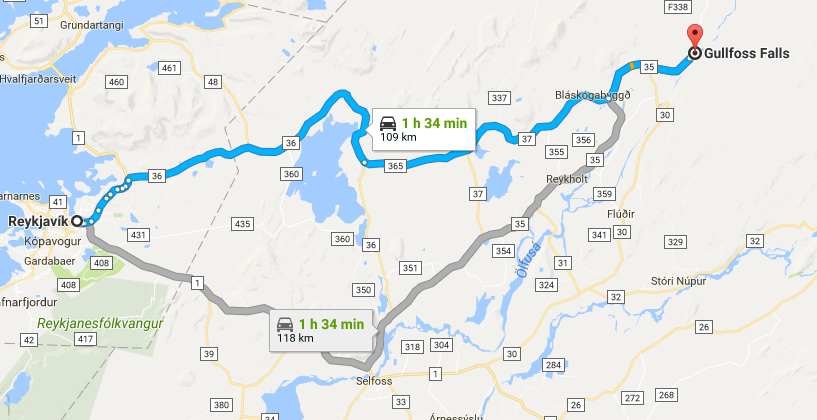 The Golden Circle Road Map, from Reykjavik to Gullfoss Falls. (Click to expand)

The 300km long Golden Circle, a very popular place for day trips and increasingly for Icelandic Farm Holidays, is so called due to the large concentration of natural attractions around it. It is a wonder to explore, with the spectacular, volcanic, Thingvellir national park being especially of note for being both the original site of Iceland‘s, and it is said, the world’s, oldest parliament, as well as the meeting point of the tectonic plates of Eurasia and North America. These plates are slowly moving apart and have created fissures in the ground over the millenia, which can be a strange, kind of unsettling sight. The huge Silfra fissure is full of icy cold, crystal clear, glacier water and is a popular place for scuba diving and snorkelling.

It is also home to many rivers and lakes, Laugarvatn in particular, and the famous hot springs of Geysir, from where we get the word geyser from in English. It comes from the Icelandic word geysa, which has roots in old Norse and means “to gush”. The original Geysir, was by all accounts an incredible sight, sometimes gushing well over 100 meters into the air back in the 19th century, but sadly, due to seismic changes over the years, it now erupts extremely infrequently. Its nearby ‘little sister’ though, named Strokkur, is far more reliable, erupting every few minutes to heights of about 30 meters. 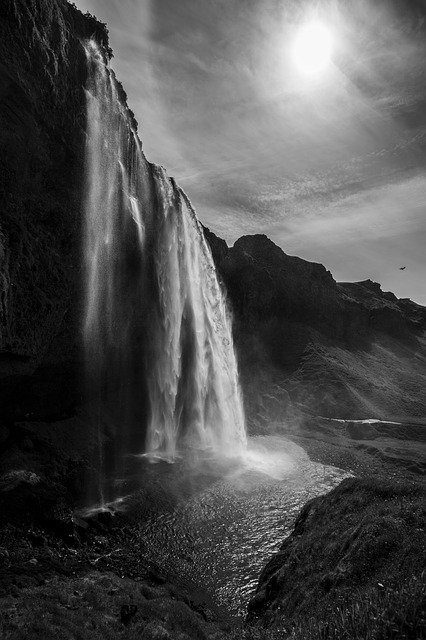 The Golden Circle has numerous quite stunning waterfalls too such as Gullfoss, Europe’s largest in terms of volume, where all the water rushes into a quite narrow crevice to dramatic, and noisy, effect. Seljalandsfoss waterfall is another that is one of Iceland‘s most photographed natural wonders. It launches itself, equally dramatically and noisily, off a 65 meter high cliff and makes quite a sight, from above or below.

There is of course some tremendous hiking around the Golden Circle; between Skógar and Þórsmörk in particular there is the quite spectacular Fimmvörðuháls trail, which runs between the Eyjafjallajökull and Mýrdalsjökull. Eyjafjallajökull, if you remember, being the one which famously erupted in 2010 sending up a huge cloud of ash and disrupting flights all around Europe.

Though it is full of wild scenery and interesting sights (but also plenty of agricultural land) it is still quite close to Reykjavik and so makes for a more convenient adventure into rural Iceland than say taking the long, very long, Ring Road which circles the entire Island.

If you were to breeze through it, it would take only about three hours but surely no one ever does, so, if you don’t plan an overnight stop, give it at least eight hours. There are plenty of companies offering day tours from Reykjavik too but by far the best experience is to hire a car yourself and take it nice and slow, staying overnight along the way.

You’ll be passing through some small villages along the route but, (and of course being Farm Stay Planet we’re a little biased!) for the full rural Iceland experience definitely try a farm stay, somewhere isolated and secluded, where, if it’s winter time, you can really get to enjoy another of Iceland’s natural wonders, the fabled Northern Lights, with practically zero artificial light pollution.

Our Recommended Farm Stays Around The Golden Circle:

CLICK HERE TO SEE OUR CHOICES FOR THE BEST FARM STAYS AROUND THE GOLDEN CIRCLE. ALL COME WITH INSTANT ONLINE BOOKING & LOWEST PRICE GUARANTEED VIA BOOKING.COM

PASSING THROUGH THE CITY? CHECK OUT HOTELS IN REYKJAVIK HERE VIA BOOKING.COM